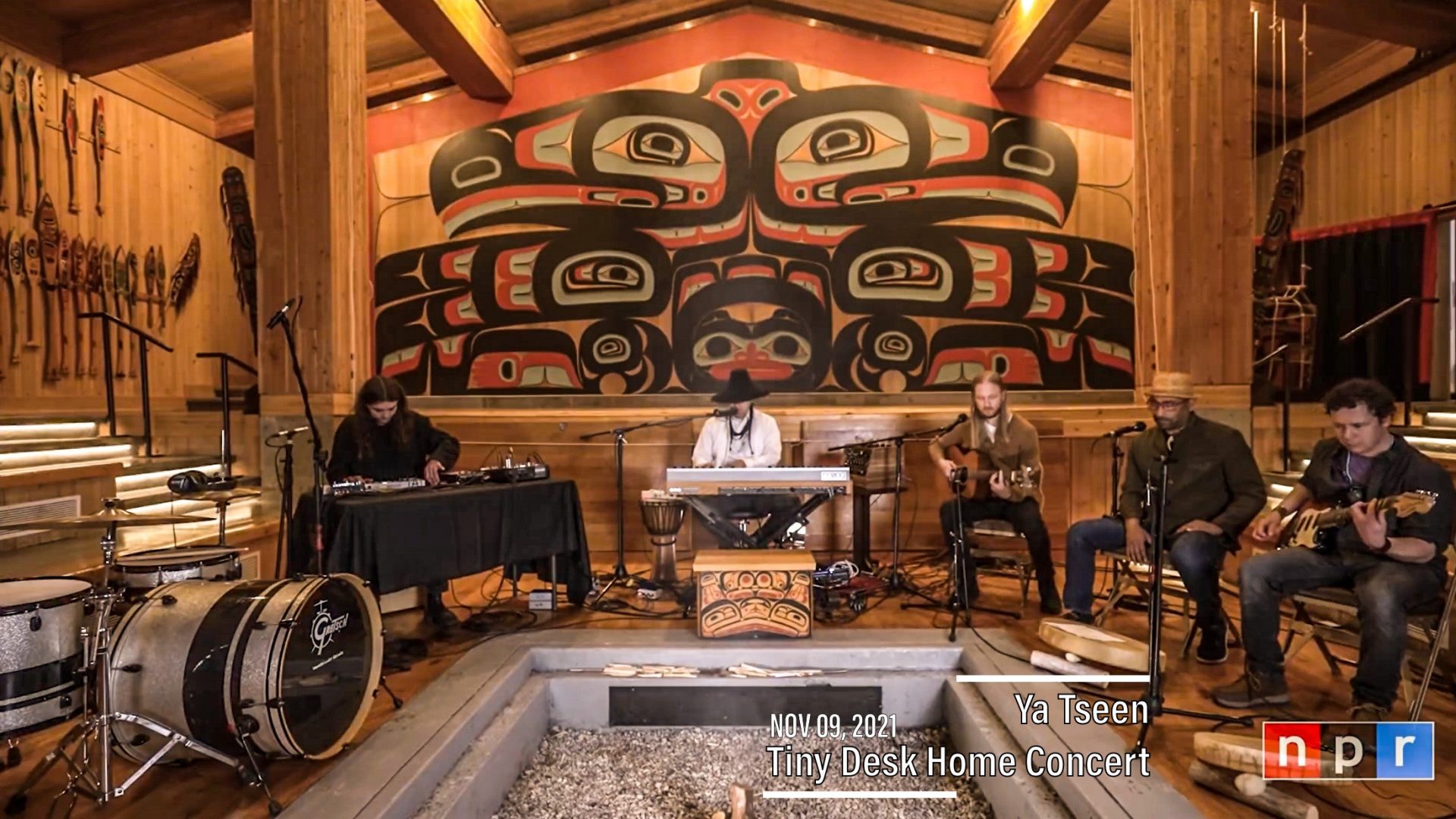 “Indian Yard” is the first album by Ya Tseen, an Alaskan indigenous band, released on the Seattle-based Sub Pop label. Ya Tseen is another pseudonym and project of the indigenous highly active artist Nicholas Galanin. In order to get closer to the album “Indian Yard”, we first have to deal with Nicholas Galanin in detail, so that we can place his work in the overall artistic context.

Ya Tseen aka Nicholas Galanin lives and works with his family in Sitka, Alaska and his work explores contemporary indigenous culture from a perspective defined by a deep connection to his land and homeland. His artwork is marked by keen observational skills and engages the intersections of culture and ways of life in ways of language, imagery, and sound.

Galanin’s works are inherently political, outspoken, bold and poetic, at the same time imbued with critical thinking and formally serve as precious vessels for indigenous knowledge, culture, and methods. Galanin engages with indigenous past, present, and future as a way to reinvigorate the collective memory that has been intentionally darkened, removing barriers to the engagement and keeping alive the transmission of knowledge about indigenous history. His works are both critical of the commercialization of Indigenous culture and contribute to the continued existence of Tlingit art.

He uses materials and processes to create his artwork that expand the global dialogue about Indigenous arts and describe the ways in which culture can be transported. His work is in numerous public and private collections and has been exhibited worldwide. Galanin apprenticed with master carvers in his homeland, graduated with a Bachelor of Fine Arts degree from London’s Guildhall University, and received his Master of Fine Arts degree from Massey University in New Zealand.

Nicholas Galanin about himself and his art:

“Our culture is deeply rooted in our connection to the land and my homeland; like the land, culture cannot be limited. I draw inspiration from generations of Tlingit and Unangax̂ cultures that are deeply connected to our land, to which I belong. From this perspective, I engage with contemporary conditions in a cross-cultural way.

My creative process is a constant pursuit of freedom and of visions for the present and the future. Through the use of indigenous and non-indigenous methods and materials, I resist superficial romanticization, cultural categorization and limitation. Through my work I address such topics as adaptability, resilience along with survival strategies, rampant cultural memorylessness and even dream worlds, memories, the new blossoming of cultural traditions and connection to our land, nature and homeland as well as the effects of being separated from it.”

If you expect “Indian Yard” to be a cerebral world music album, you are seriously on the wrong path. Ya Tseen have created a beautiful pop album with multi-dimensional electronic layers, on which the vocals and the sound of conventional instruments such as bass, guitar and drums can unfold themselves beautifully. The listener is immediately drawn into the magic of the album, but even as a pop album, this opus is so completely different from all that this genre usually offers us.

“Indian Yard” is rich in emotions and has a keen sense for topics such as love, longing, frustration, pain, revolution and connection with the compelling expressions of an indigenous consciousness.

The energetic electro-soul cascade of “Close the Distance,” the smooth funky feeling of “Get Yourself Together,” or even the insistent reverberation of “Back in That Time” sung in Jupik: with these 11 tracks, Galanin, Ya Tseen, and Indigenous art in general are engaged in a hyper-trendy musical dialogue with artists like Moses Sumney and TV on the Radio, FKA Twigs, and James Blake.

Indian Yard is a profound landmark of liberation and an act of protest that explores the interactions of past, present, and future realities. In a reference to Sun Ra, the track “Gently To The Sun” is so aptly stating, “Medicine for a nightmare” – and that is an appropriate description for an album that offers a much-needed cure for all that is horribly plaguing us individually today, as well as all societies on this planet which is the land and home of us all.

“Indian Yard” is by no means Galanin’s first album. Until today, he has released a slew of albums under various pseudonyms such as Silver Jackson and Indian Agent, and collaborated with artists such as Meshell Ndegeocello, Tanya Tagaq and Samantha Crain. And for nearly a decade, he has also been part of the revolutionary boundary-pushing art collective Black Constellation alongside Shabazz Palaces and THEESatisfaction.

Galanin is bringing these experiences and his partnerships into the collaborative songs of Indian Yard. The album combines important familial private aspects with current social and environmental justice movements that seek to eliminate destructive systems to usher in a new structure. He shared these concepts with bandmates Zak D. Wass and Otis Calvin III. They teamed up with longtime collaborator Benjamin Verdoes to create the album.

I present you here again quickly the latest video of Ya Tseen, because this transports the message and the spirit of the band better than the written word.

The hypnotizing opener “Knives” he recorded together with “Portugal. the Man” from Alaska. The infectious “Knives” is a reflection on human desire that is as infectious as it is stirringly intense. “At Tugáni,” a song named after Galanin’s youngest child, is a love song that connects past and future. “Synthetic Gods,” based on verses by Shabazz Palaces and Stas THEE Boss, is a sonically highly seductive, tension-filled reflection on simmering crises, and generates the pressure necessary to encourage and secure the sovereignty and power of indigenous nations.

With its radiant sounds and catchy hooks, Indian Yard conveys socio-political messages with the power of protest songs, packaged in beautiful pop songs with nuanced reflections on human experiences and responsibilities we need to live up to. Indian Yard is a powerful testament to humanity from an Indigenous perspective. Created by one of the world’s leading indigenous artists, Indian Yard is an intense signal consisting of emotion and a sense of belonging together. “Indian Yard” is indeed one of the best pop albums of the otherwise bleak year 2021.

Nicholas, along with his companions, has launched a fascinatingly multi-layered 11-track album that never, at any point, allows even a hint of boredom to emerge. As time passes by frantically while playing the album, a personal connection between the listener and the creators of the album is established just as quickly, and you feel prompted to engage more intensely with the artwork of Nicholas Galanin, his powerful message to the world, and indigenous culture in general. And when you have done that, you suddenly realize that an incredibly strong filling feeling has taken hold in your soul.

The album is available on Qobuz in 24 bit / 48 kHz format and sounds excellent. The sound impression is characterized by a very good spatiality and it comes across pleasantly warm and soft, with excellent bass, balanced treble and a naturally harmonious midrange.